Christianity Today- What would Jesus Say? 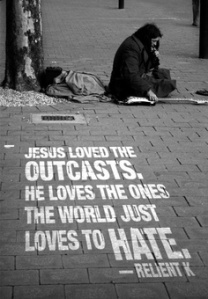 Jesus, whether you believe he is the son of God, a prophet, good teacher, or just a fictional character from history, etc., he is an example and a model of what we could all learn from on one level or another about forgiveness, love, compassion, mercy, etc…

Man, myth, God, whatever or whoever, went against the norms, broke the rules, and was either really hated or really loved……

Jesus was not hung up in titles, status, money, or positions. In fact he says……let the first be last and the last be first. He washed his disciples feet in the ultimate act of humility although he was their teacher. He recognized the woman who had little to give, but gave with all her heart versus the man who had much, but gave very little in comparison.

Did Jesus condone or enable wrong doing? Of course not. He encouraged and challenged people to turn from their ways. However, he was fair, balanced, tried to meet people where they were at in love, yet not afraid to point out at times denial and hypocrisy. Wrong doing is wrong doing. He was clear on that spreading gossip, malice, and slander was also just as wrong as other “sins”.

At the same time he was friends with and took time for those who would normally be marginalized then and in our world today including by many in the church. Jesus became friends with the prostitutes, the poor, the homeless, the mentally ill, the criminals from the least to the worst rich and poor, people with addictions, and so on.  He understood situations where people were unhealthy, hurting, spiritually lacking or even deprived. He wanted people to find peace and freedom within and reached out through love and example of what was possible rather than condemn and shame. He did not expect people to go and “clean themselves up” before they were acceptable for his kingdom,  in today’s world, church.

However, sometimes he did come down hard on the religious leaders of the time because they were professing to be the righteous, yet their actions were the opposite of, all the more of what a spiritual / religious leader should encompass………..love, peace, mercy, grace, compassion, tolerance. In fact, it was the religious leaders who were responsible for having Jesus crucified.

What if God came in disguise today as one of us? The “least” of any of us? Would those who say they believe have the heart of Jesus or at least pray to have the heart of Jesus?  If one were to fail, be willing to make amends that may be needed and from a place of all sincerity? When people see this, then they will know you are a Christian without you having to tell them.

Maybe some of you who read this do not profess to be a christian or is not sure if Jesus was real or whether he was a man, prophet, or otherwise. One thing that can be said, real or not, the Jesus that was just described here and throughout history, sure seems to be one cool dude.

Hover over image for complete profile